For weeks, it was unclear how Oregon leaders could defuse the increasingly violent standoff between federal officers and protesters in downtown Portland and convince Homeland Security officers to leave.

Trump administration officials did not demand any concessions or pledges from Brown before they agreed officers would depart, Brown’s chief of staff Nik Blosser told The Oregonian/OregonLive Wednesday.

“They’re not gonna walk in and say, ‘We screwed up,’” Blosser said. “But every action they took in the last week implied that, that they needed a different strategy.”

With Portland police prohibited since July 22 from coordinating with federal officers, officers from Homeland Security and Customs and Border Control faced an increasingly dangerous situation. “They know every time they step out of the building, let alone step into the street, they get in trouble and they know that just strategically, the city of Portland won’t even talk to them because of their actions,” Blosser said.

Trump insisted Wednesday he wasn’t giving up on the law-and-order push focused on Democratic cities. But in a separate tweet he appeared to be trying out a new election year talking point to stir up racist fears of affordable housing. Similarly, the interim head of the U.S. Department of Homeland Security rejected the idea that the administration was changing course on its operation to quell protests in U.S. cities.

“The governor reached out, is what changed,” Acting Secretary Chad Wolf said in a telephone call with reporters.

Federal law enforcement officers are expected to begin a phased withdrawal from Portland Thursday with Oregon State Police troopers stepping in to safeguard the downtown federal courthouse, under the plan Brown announced Wednesday. But exactly how that will unfold remains to be seen, given that shortly after the governor’s announcement Wolf told reporters federal officers would remain in the city “until we are assured that the courthouse and other federal facilities will no longer be attacked nightly and set afire.”

The talks, which started late last week, gave Brown a moment in the spotlight and left city of Portland officials including Mayor Ted Wheeler out-of-the-loop until Tuesday about the major developments regarding their city. Blosser said officials in Brown’s office notified city officials and sought their input as soon as it was clear the Trump administration was interested. All high-ranking Oregon Democrats, in Congress, at the Capitol and in Portland City Hall, have publicly attacked Trump, not only for the federal crackdown on Portland protests but on a variety of issues going back years. Nonetheless, Blosser said that was not an impediment in discussions.

Federal and state officials started to discuss the drawdown late last week, within hours of a federal judge’s order temporarily barring federal officers from using force, threats and dispersal orders against journalists and legal observers who are documenting the protests and law enforcement response. U.S. District Judge Michael H. Simon, who is married to Democratic U.S. Rep. Suzanne Bonamici, rejected the federal government’s argument that federal officers shooting journalists and legal observers with impact munitions in the back, neck and legs were “unintended consequences” of crowd control, and he said that individual federal officers or supervisors could be held liable if they intentionally disregard his ruling.

“When wrongdoing is underway, officials have great incentive to blindfold the eyes of the Fourth Estate,” Simon wrote in his ruling on Day 57 of the protests, citing the role of journalists documenting how federal officers seriously injure peaceful protesters. “The free press is the guardian of the public interest, and the judiciary is the guardian of the press.”

Just a day earlier, Wheeler grabbed national media attention when he attended the nightly protest in front of the federal courthouse and was subjected to tear gas along with other attendees. In an interview the next morning on CNN, Wheeler accused Trump of “using these federal forces as his own personal militia” and “creating the chaos in Democratically controlled cities so ironically he can point to the chaos and then say, ‘Look those Democratically controlled cities are in chaos and I and only I can stop the chaos.’”

In a phone call with reporters Wednesday, Wolf attributed the agreement to an about-face by Oregon’s governor late last week and insisted he and Attorney General William Barr are in no way backing away from their stance that it is appropriate to deploy federal officers to Portland protests.

“The governor made that decision finally around day 57 (of the protests), decided to be a partner and reached out to us to offer Oregon State Police,” Wolf said. “Why that did not happen on day 10 I do not know … I’m glad that she changed her mind, I’m glad she reached out.”

Oregon is a blue state, with Democrats in all but one of the five statewide elected offices, holding six of seven seats in Congress and leading the state’s largest city government. Political leaders at all levels lambasted the president over his response to the Black Lives Matter movement long before he dispatched federal officers in early July with the stated purpose of quelling the by then dwindling protests centered at Portland’s local Justice Center and federal courthouse. During her 2018 re-election campaign, Brown frequently cast herself as running against Trump rather than her actual opponent, Republican state Rep. Knute Buehler who’d distanced himself from the president. In recent months the governor has gone after Trump repeatedly for mishandling the coronavirus crisis.

Two weeks ago, while Wolf was in the city, Wheeler said on Twitter that he wouldn’t have met with Wolf even if he’d been asked. When asked what caused Wheeler to change his mind, a mayor’s office spokesperson said Monday that, “He wants to put an end to the violence and destruction.”

Brown has repeatedly accused the Trump administration of “political theater” in recent weeks but did not say she would refuse a meeting with them. Though the governor has sided with Wheeler and city officials in calling for federal officers to leave the city, she has been absent from daily public pleas by city leaders in recent weeks to end violence during demonstrations. She has made infrequent comments about police actions at the protests before then.

On Wednesday in her statement announcing the deal with federal authorities, Brown said she was concerned about the nightly confrontations between the Portland community and federal officers.

“We need to recognize that the protests in Portland are not solely about the federal presence,” she said. “They started before federal agents descended on our city and they will likely continue after they leave.”

City officials weren’t directly involved in the negotiations to have federal officers leave Portland despite Wheeler and Commissioner Jo Ann Hardest publicly asking to be on Monday. “We were in heavy conversation by that time … but the city didn’t know that,” Blosser said.

Thomas Wheatley, the governor’s interim director of communications, said Brown’s rapport with Vice President Mike Pence, whom she initially reached out to on July 23, helped get the talks going. Pence holds regular phone calls with governors about the national response to COVID-19, and Wheatley and Blosser described Brown’s relationship with Trump’s No. 2 as cordial.

During a news conference with the mayors of Seattle, Albuquerque, Oakland and Philadelphia about a half-hour after the Portland phased withdrawal announcement, Wheeler said federal authorities only spoke directly with the governor’s office and then information was relayed back to the city.

He said the city was looped beginning Tuesday morning and he’s pleased “we’ve reclaimed Portland or will soon.”

“In the meantime, we would do well to remember that this movement is not about the legal right of federal law enforcement to operate in our cities,” Wheeler said. “It’s about the urgent and necessary work of criminal justice, racial justice and policing reform.”

Sonia Schmanski, one of Wheeler’s deputy chiefs of staff, said federal authorities acknowledged the mayor and Hardesty’s Monday request to meet directly to discuss federal officers leaving, but they never gave an answer.

Brown and Portland leaders’ disjointed efforts to end the federal law enforcement presence suggest there has been little change since March when the governor and mayor were clearly at odds in a press conference over the state’s coronavirus response. Wheeler pressured Brown to issue a mandatory statewide stay-home order, threatening to enact a citywide ban if the governor didn’t act. Officials floundered through the briefing, with Wheeler saying an order was forthcoming and Brown stepping in to correct him that she wasn’t working on such an order.

On Wednesday, it was evident the state had not yet filled in city officials on details of the plan. Schmanski said she didn’t know how many state troopers will be coming to the city and that Gov. Brown never told city officials specifically why she chose to step in.

“I think it was becoming clear to everybody that the situation on the ground here was unsustainable and that state resources were going to be a necessary part of the agreement with the feds to leave,” Schmanski said.

When asked if city officials were concerned that they weren’t directly part of the negotiation table, she said, “We’re just glad there’s a deal.”

State troopers have responded to Portland protests before. For example, Portland police coordinated efforts with state police during demonstrations in North Portland on June 30, during which Portland officers used tear gas and other force along a mile-long stretch of North Lombard Street. Police arrived after protesters showed up at the headquarters of the Portland Police Association, which represents the majority of the city’s officers. People stuck in their cars or their homes as well as protesters in the streets were hit with the gas that night.

Hardesty’s staff did not respond to a request for comment about the federal withdrawal Wednesday and Commissioner Chloe Eudaly’s office declined to comment.

Commissioner Amanda Fritz said in a statement that she appreciates “the work of Gov. Kate Brown, Mayor Wheeler and Commissioner Hardesty in finding the way forward.” Fritz said she is “cautiously optimistic regarding the federal withdrawal” and looks forward to a “return to focusing on necessary reforms in public safety and police accountability, centering Black, Indigenous and People of Color community leaders.”

Subscribe to Oregonian/OregonLive newsletters and podcasts for the latest news and top stories.

A San Antonio hotel ranks No. 5 in the nation, according to Tripadvisor users

Thu Jul 30 , 2020
The Emma Suite at Hotel Emma goes for about $10,000 a night and features 2,500 square feet, plus an outdoor terrace with fireplace. Bath comes with a claw foot tub and double vanities. There is a wet bar, grand piano and an additional bedroom on the second floor. less The […] 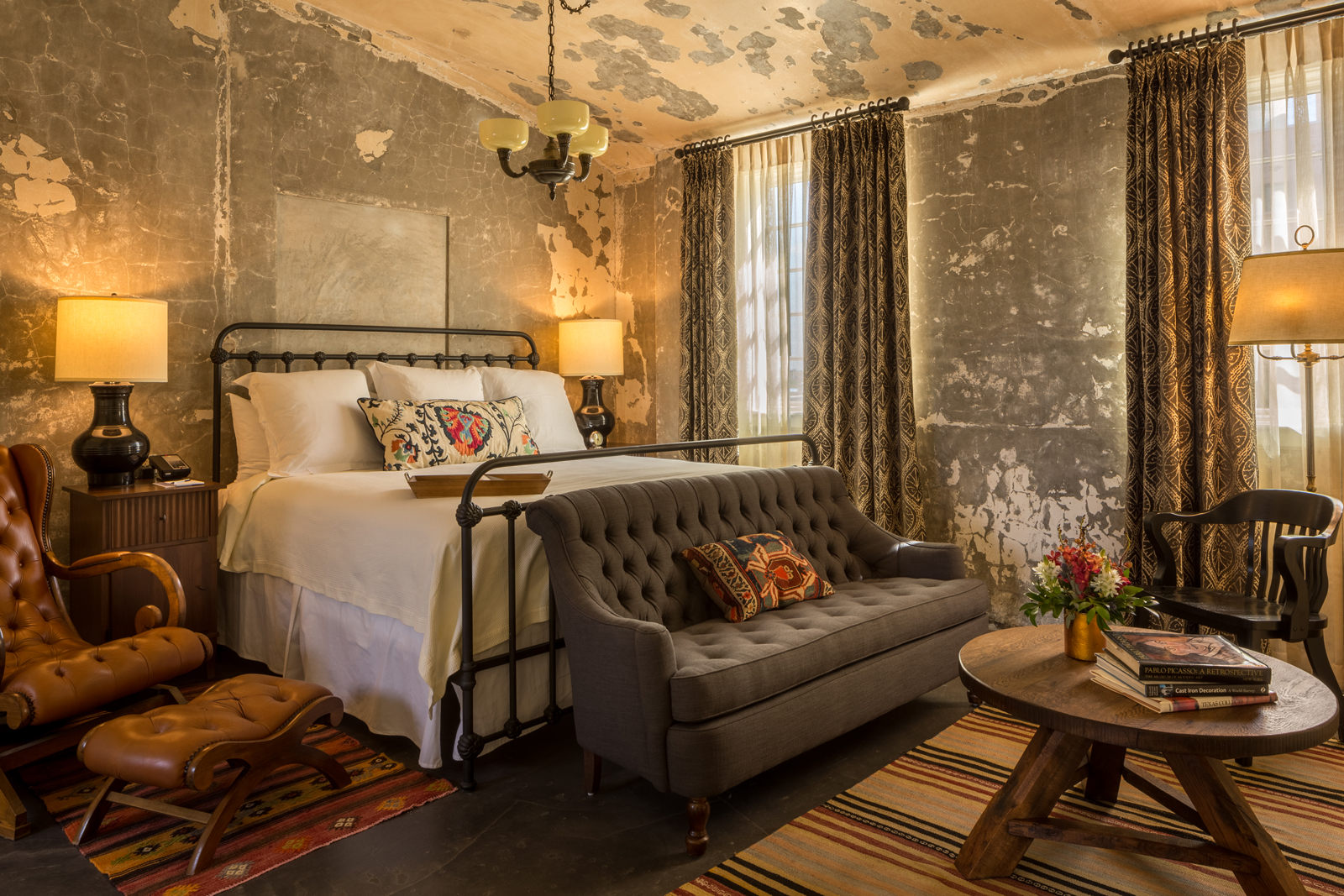